I love Winter Solstice.  I love the darkness, the quiet, the cold, the hibernation.  I realize I may be in the minority.  I know that many feel relieved when this day arrives because it means tomorrow there will be a bit more light.  I love more light also.  Yet, what I seem to respond to this time of year involves my yearning for spaciousness and solitude.

I love a heavy snow because it stops activity for awhile.

I created my trip.  And, I had to stay very aware to experience any space, solitude and quiet in those settings!  Several times I had to laugh at myself because hibernation was nowhere to be found!

And, immediately upon returning home, several clients had overwhelming situations and I had to play catch up.

I have found this practice of staying aware to experience space, solitude and quiet in busy and chaotic situations serves me beautifully.  I am driving slower.  Eating healthier.  Taking more pictures.  Meditating for 10 seconds at a time.  Getting up earlier.  Driving without the radio or phone calls.  And, as I mentioned in the last Sacred Space Notebook, creating a painting daily in 21 minutes or less.

Today I’d love to share with you my painting that depicts fours ways to show nothing.  I loved the assignment, even though I don’t believe “nothing” exists. 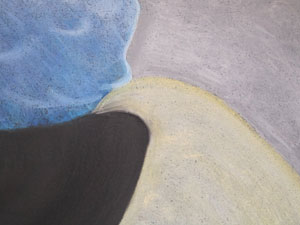 This painting represents four ways I depicted nothing, yet when I look at it, I am drawn into a peaceful and comforting place . . .

I invite you to share your own responses and experiences in the Comments section below.

Until December 21, I am engaged in a daily intuitive painting practice.  Our assignment a few days ago involved creating a painting and then putting a new painting on top of it.  I’m not sure what the intended purpose was, but something profound happened for me.

We create the paintings with soft pastels and complete them in 21 minutes.  Thus, the need for intuition.  My first painting depicted one of my favorite symbols, the spiral.  It filled the page.  Then for my second painting, I put a simple landscape on top of the spiral.

This painting gives me enormous peace.  And I feel excited.  As I contemplated what it meant to me, I realized it demonstrated two significant things.

First, I did not destroy the spiral, like I thought I would.  I simply added a whole new reality on top of it.  Ah, things really don’t die, they simply change form.  The spiral still exists.  I just don’t see it as clearly.

Second, I saw that the spiral depicted spirit, divine consciousness and the landscape depicted form, human consciousness.  And, they co-exist!

Before I created this painting, these two paintings, I knew, I believed that things don’t ever not exist and that they just change form.  I also knew, believed that divine consciousness and human consciousness co-exist. Yet the experience of creating something that depicts it, well, I find that enormously comforting!

I invite you to share your own responses and experiences in the Comments section below.