Last Sunday, I gave a talk at church about my two intertwined paths to the Divine. The more formal, worship and body prayer path and the church of nature path.

The worship path
From the Catholic church of my childhood, through Christian mysticism, Quaker meeting, a dozen Christian church field trips, Dances of Universal Peace, Unity and Religious Science churches and Kundalini yoga to Celebration Church in Santa Fe (a non-denominational, co-created church without a minister.)

The church of nature path
As a child, I spent hundreds of hours laying under a tree watching the clouds. I also wiled away many summer afternoons on the banks of the Roaring Fork and Crystal rivers making smithereens. As a teenager, I was mesmerized by the stillness in the trees while skiing.

In my late 30s, I discovered the sacred vastness of New Mexico. This is the second time I’ve lived here because it’s the home of my soul. It feel easier for me to know God here – in the earth and the rocks, the sun and the moon, the sky and the stars, the sage and the rocks, the trees and the wind.

When I lived in Denver, I wrote most of the prayers in my first book while sitting under trees in City Park. I would drive up to Red Rocks when I was in a funk to hang out with those awesome red rocks. And, I climbed high enough to look out over the entire city, which consistently shifted my perspective.

It has always been natural and easy for me to connect with the Divine in nature, through nature. 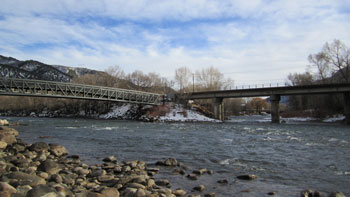 Confluence of the Colorado River and Roaring Fork River.
Who could not find God here?!?

Back at Celebration Church last Sunday
I loved giving the talk. And what surprised me: 6 or 7 people told me that my story was their story. At first I was puzzled. Had they too visited Quaker meeting and several fundamentalist Christian Churches? Did they know how to make smithereens? Did they study to become a Unity minister?

Then I realized what they were saying – they too are seekers. They too had looked in churches and alternatives to churches and had often found the Divine in nature.

What about you? What has been your path to the Divine?

1 thought on “My Intertwined Paths to the Divine”