During my personal spiritual retreat last week, I took a day to drive the three hours to Glenwood Springs to meet with my new coach, Jeff Patterson.  We spent most of our time sitting on rocks at the confluence of the Roaring Fork and Colorado Rivers.  Later that day, I spent several hours upstream on the Roaring Fork, taking in her gifts.

I did not consciously know it before sitting there on that beautiful summer day, but I had been starving for the river.

As a child and teenager, I spent a couple weeks of most of my summers playing on the banks of the Crystal, Roaring Fork and Frying Pan Rivers while my dad fished.  I loved wading in the freezing cold water, building forts out of sticks and smashing rocks to smithereens. 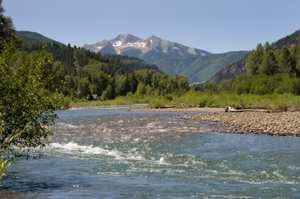 The Crystal River near Redstone, Colorado

These Colorado rivers flow swift and powerful with clear water.  My dad taught me to respect their pull and never under estimate how quickly I could be taken down river without my consent.  When I first visited the east coast as a young adult, I was appalled by how lazy the rivers there seemed to me.

And, then I fell in love with the New Mexico desert and only occasionally noticed the Rio Grande River, even though I have spent hundreds of hours within a mile or two of her.  I’ve devoted all my retreat time to the desert and have only ventured to the mountains to ski – again without paying attention to the rivers.

What nourishment had I craved from the river without even knowing?

As a very grounded Taurus, I love being on the land.  Often slow to change, I can sometimes resist flow, preferring  to plan.  The steady roar of the Roaring Fork called me to embrace flow and change with a bit more trust.  I could feel my body relax into the flow of the river, feeling the constancy of change – even feeling excited by it!

For the past few months, I have been in the  middle of a tremendous personal and professional growth spurt.  The mighty flow of the river offered me courage to more fully allow myself to grow and flourish, even as I often feel like a baby beginner . . .

2 thoughts on “Spiritual Retreat: Flowing with the Roaring Fork River”