I watched the movie, “Titanic” for the second time over the long Thanksgiving holiday weekend.  One of my favorite things about watching a movie more than once involves getting to pay attention to different things because I already know the outcome.

What mesmerized me this time: how differently people reacted as they came to understand the certainty that many of them would die.

In the spring of 2001, my dad was in hospice.  At that time, someone told me that we each die as we lived.  Not much of a surprise when I thought about it.  And, I do remember that I was expecting, perhaps hoping, for something different from my dad in death than I received from him in life.  I took that opportunity to reflect on how I wanted to live so that when my time comes, I will be dying in a way that feels true to me, my life, my legacy.

As the Titanic was sinking, many people were panicking and all of their actions were completely focused on doing whatever they could to survive, at the cost of whomever was in the way.  Others were trying to save themselves and did try to help another – if it wasn’t too inconvenient.  Still others went to great lengths to save another, maybe even at the risk of their own peril.  One of the main characters tried to buy his safety with a pocketful of cash. 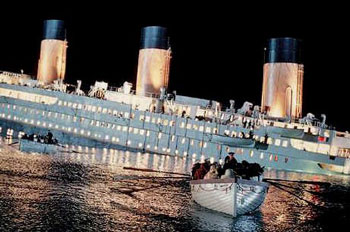 Even as our ship is sinking, we have the opportunity to make a conscious choice about who we are and how we behave . . .

The people who most intrigued me consciously chose to accept their fate and gracefully go down with the ship.  The captain who took the wheel until the water rushed in and swept him and the wheel away.  The builder of the ship who took his last drink by the fire.  The mother of two children who quietly sang to them, after she tucked them into bed – for the last time.

The most amazing to me: the musicians, a string quartet, who calmly played cheerful music amidst chaos and bedlam on the first-class deck until minutes before the ship went down.  The leader finally said, “Let’s call it a night.  It’s been a pleasure playing with you.”  They disbanded.

Alone, he then picked up his violin and began playing more somber and haunting – appropriate – music.  The other musicians, who had begun walking away, stopped.  They then all turned and came back to joined him in their last few songs of that lifetime.

I want to be those guys in my life and my death!  Offering my gifts to the world, even when it seems the world is in too big a mess to receive my gifts.  Confidently, consciously and courageously being who I am fully, with dignity and devotion, even with my last
breath . . .